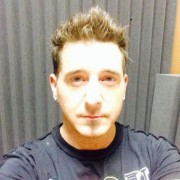 Raised in a small town north of Boston called Peabody, Jonathan Mover began playing drums late in his thirteenth year of age. Working from a pad to his first kit, he practiced constantly to favorite records and drummers.

At that age he was influenced heavily by English progressive rock and American artists such as: Frank Zappa, Todd Rundgren and The Tubes. Then, his next kit gradually grew to include concert toms and a second kick drum.

He wasn’t much into playing out locally or jamming with friends, as he was more into studying and progressing on his own. This led to branching out to learn tuned percussion. Concentrating mainly on tympani, glock and vibes, it came in very handy when he accepted the offer to tour with one of the largest unsigned acts of New England, ‘The Incredible Two Man Band’, otherwise known as ITMB. Needless to say, the new kit now grew to include tymps, octobans, syndrums and a gong…

After a brief stint at Berklee College of Music, Jonathan decided to seek out and study privately with Gary Chaffee. Spending about six months working with Gary and covering as much of his material as possible, along with a few more local recording sessions, and then he was ready to make the move to London.

London proved to be the right place. Various gigs and connections (Mike Corby/Toyah/Marillion) eventually led to his teaming up with Steve Howe (YES) and Steve Hackett (GENESIS) to form GTR.

Playing a gig with Joe Satriani and Steve Vai at the Chicago Namm Show prompted a relocation back to the States in ’88. The move eventually led to various recordings and/or performances with artists such as: Alice Cooper, Aretha Franklin, Mick Jagger, Peter Frampton, Frank Gambale, Joe Lynn Turner and many others.

Composing and producing were the next ventures which resulted in his first solo effort known as ‘einstein’, a progressive rock trio with Stan Jankowski (vox, gtr) and Jani Mangini (keys), playing in every time signature except 4/4…!

Before closing the doors of his state-of-the-art recording facility, Skyline Studios NYC after 17 years, much of his time was spend on productions and recordings with contemporary artists such as Fuel (Epic), Everlast (Def Jam) and Shakira (Sony). More discography here.

Jonathan’s latest venture, along with all the sessions and tours, was the launching of his own drum/music magazine called Drumhead. Make sure you subscribe!