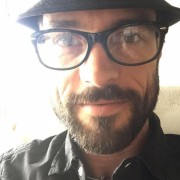 A native of Vienna/Austria, Thomas Lang took up drumming at the age of 5. In addition to lessons at local music schools and years of private tuition, he was formally educated at the Vienna Conservatory of Music.

After leaving the conservatory, Lang began working professionally – working his way through the European Pop, Rock and Jazz scenes.

Thomas has performed at every major international drum festival and has toured the world many times over as a sideman as well as solo performer. Thomas has appeared everywhere from “Top of the Pops” to the Eurovision Song contest, from sold-out football stadiums to the Modern Drummer Festival.

Lang’s original practice regime eventually became the basis for his 2-part series of instructional videos, “Ultimatives Schlagzeug I & II” which were originally released in 1995. Due to overwhelming demand, these videos were re-released on DVD in 2004 by Hudson Music (www.hudsonmusic.com).

In 2003 Lang released the multi award-winning instructional DVD and book “Creative Control” which was an instant hit with drummers and drum teachers around the world.

His highly anticipated follow-up DVD and book, “Creative Coordination & Advanced Foot Technique” (www.halleonard.com) was released in November of 2006.
This ground-braking DVD has also won worldwide awards and and marks a milestone in modern high-end drumming concepts and technique.
All of Thomas Lang’s DVD’s and books remain Best-sellers and are also available through his offical merchandise site: www.muso-mart.com.

In his quest to, “play the unplayed,” Thomas has worked cooperatively with the research and development team at Meinl Cymbals to create, “Tom’s Becken” – a pitch-matched range of contemporary crash cymbals that provide acoustic and electronic drummers with modern sounds that resemble artificially engineered cymbal samples. Launched in 2002, “Tom’s Becken” were so well received that in 2004 Thomas Lang worked with Meinl once again to design the “Fast Hats” , and a whole series of “Filter Chinas” (www.meinlcymbals.com).